Denitrification is one of the major sources of N2O in freshwaters. Diverse forms of organic compounds act as the electron donors for microbial denitrification. However, the influences of carbon sources on N2O production, N2O reduction, isotope fractionation and functional microbes during denitrification were largely unknown. In this study, five forms of carbon sources (i.e. acetate, citrate, glucose, cellobiose and leucine) were used to enrich denitrifiers in freshwater sediments. N2O conversion in the enrichments was investigated by a combination of inhibition technique, natural stable isotope method and metagenomics. Acetylene was effective in inhibiting N2O reduction without influencing the isotopic characteristics during N2O production. Glucose led to the least N2O production and reduction, in accordance with the lowest abundance of both NO and N2O reductases in this enrichment. δ18O and site preference value (SP, =δ15Nα-δ15Nβ) of N2O were sensitive to discriminate the five carbon sources, except when comparing acetate and leucine. Isotopic values of N2O were not significantly different in these two enrichments due to the similarity of NO reductases - Pseudomonas-type cNorB. Specifically, the enrichment with cellobiose produced N2O with the lowest δ18O values (39.4‰±1.1‰), due to Alicycliphilus with both cNorB and qNorB. The enrichment with glucose led to the highest SP values (8.9‰±8.6‰), caused by Thiobacillus-type cNorB. Our results demonstrated the link between carbon sources, N2O production and reduction, isotopic signatures, microbial populations and enzymes during denitrification in freshwaters. 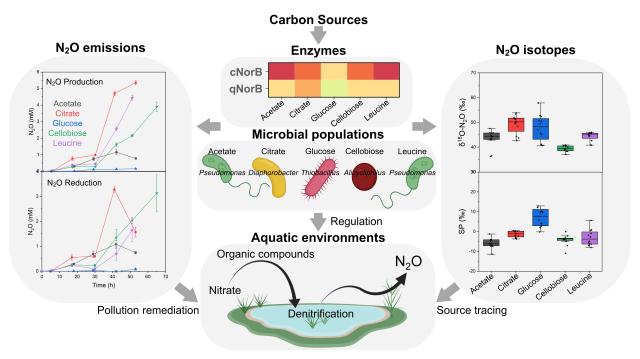